In july 1971, my father gained a company car – a just released HQ Premier and his daily driver – a HG Premier was passed onto my mother.  She could not get used to the “big” premier after her agile little Cortina.  So in May 1972, after shelling out a little more money and with a generouse repayment plan, I took over the HG Premier and my mother took back her beloved Cortina.

The HG colour was Mediterranean Blue with sandlewood interior, bench front seat with a large fold-down centre armrest that made it look like buckets, trimatic column shift behind a 186 six cylinder engine.  Added “chromies” and redwall radials.  Had to bash up the lip on the rear guards to accommodate the 7″ wide rubber.  A really beautiful car and great to drive. 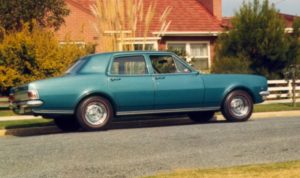 At the same time the new HQ Monaro GTS (coupe only at that time) began appearing in increasing numbers on the roads.  I became besotted and constantly studied the HQ brochure and GTS options list….

With a loan still to repay on the HG Premier and as a 2nd year apprentice, there seemed no hope at all, for the forseeable future, of being able to buy a $3,800 HQ GTS,.

By July 1972 I realised I could not exist without a new HQ GTS coupe so I hatched a scheme to “give back” the HG Premier for my mother to again drive, extinguish the loan on the HG, get my old Cortina back which I had previously paid for (and use as a trade-in), get my father to go guarantor on a $2,500 personal loan (7-year term!) from a bank and with my wage savings, order a new HQ GTS and be in debt for the foreseable future.  And the plan came to pass !!!!!