The Holden HQ – HZ factory air conditioning system can be brought back to better than new performance by following a few simple steps.

I can recondition GM A6 compressors used in Holden HK through the VH, provided the units have been kept sealed.   If compressors are stored for long periods, without sealing off the ports,  moisture can enter and cause surface corrosion in the cylinder bores.

to discuss the feasibility of reconditioning your compressor.

Note: The details below are focused on the HQ – HZ factory air systems.  The WB factory AC system has a number of fundamental differences although many parts can be re-used in HQ – HZ systems if needed.

The WB system is a compressor-cycling system rather than a POA valve-controlled system as used in HQ – HZ.  WB uses the same compressor as HQ – HZ but now labelled “Delco”.  The condenser and the evaporator unit on the firewall can be retrofitted into a HJ – HZ vehicles.  However, you will need to use the system in its WB configuration, ie as a cycling system with the WB accumulator and without a POA valve and separate receiver / dryer.  You will also need to retain the WB screw fittings on rubber hoses.

What does the POA valve do?

Unlike most other car air conditioning systems of that era, the Frigidaire GM system ran the compressor continuously rather than the on-again / off-again cycling mode of more primitave systems.  As the refrigerant gas in the evaporator (heat exchanger in the cabin) falls to 32 degrees F. or zero degrees C. in cycling mode systems,  a temperature sensor switches the compressor off to avoid the evaporator temperature falling below zero and causing moisture on it to freeze which would stop air flow into the cabin.  As the evaporator temperature rises above zero degress C, the compressor is switched on again.  GM wanted to avoid that small but noticeable change in driving “feel” when the compressor cut in and out so they ran the compressor constantly when the A/C was turned on.  This was particulary important because the Frigidaire compressor is enormously powerful producing over 42,000 BTUs of cooling power at 4,000RPM – enough to cool a small house !!.  It is a 6 cylinder axial compressor comprised of 3 double-ended pistons driven by a “swash plate”.  More pistons than a 4-cylinder car !

Can I have my system re-gassed with R134a refrigerant?

Do I need to replace my existing hoses?

If they show no signs of leaking, then they can be left alone.  The original screw clamps on the hoses and the “barb” fittings underneath, seal perfectly.  However, if your Receiver / Dryer is more than 5 years old, it is worth replacing this as it plays a vital role is trapping and containing moisture in the system.  The only way to replace this is to cut and replace the attached hose that connects the receiver / dryer to the condenser.

A professional air con shop will generally insist on replacing hoses with screw couplings on the end of hoses rather than using new hoses with the original screw clamps.  That will necessitate cutting off the “barb” ends of tubes coming out of the condensor (2), those on the compressor muffler (2) and the suction tube out of the evaporator and welding on screw couplings.  Screw couplings are clearly superior but HQ originality is lost.

Correct diameter hoses can be bought by the metre from air conditioning shops and some auto parts stores so you can do the job yourself and that way retain the original clamps.

How do I remove a rubber air con hose on my Holden?  **IMPORTANT**

Air conditioning hoses are very stiff with multiple layers of fibre strengtheners so they can tolerate the high pressure gases.  As the hoses age, they become even stiffer.  It is impossible to just pull a hose off the pipe it is attached to because they slide over one-way “barbs” on the pipes.  As the clamps are tightened, the barbs dig into the inside of the rubber hose and form a leak proof joint.  It is critically important to not cut or damage the barbs on the underlying soft aluminium pipe.

To remove hoses without putting a cut in the barbs, it is critical to take multiple horizontal slices off the sides of the last couple of inches of the hoses.  As you slice off a good amount of rubber almost down to the barbs, you should be able to start to “rock” the hose on the barb and then gradually pull it off.

Can I use HyChill Minus 30 hydrocarbon gas in my system?

Yes, this gas works a treat in the stock HQ system.  Most air con shops will try to scare you away from using it with 2 arguments;

My experience after 10 years of use in 3 different HQ – WB systems is that no corrosion is evident in systems I have pulled down when changing engines or restoring under bonnet areas.  Similarly, I have not had any issues with gas fires even when an AC charging hose failed and allowed high pressure gas to vent all over an adjacent very hot exhaust manifold.

How does HyChill perform compared to R-134a?

You need to understand the characteristics of the original R-12 to answer this.  R-12 gas exhibits a pressure of 30.2 psi when the gas reaches 32 degrees farenheight (F).  This is a critical pressure in a HQ – HZ system as it is the pressure that the POA modulates at to ensure that the evaporator core does not drop below 32 degress F and cause moisture on it to freeze and block the air flow.

At 30.1 PSI, R134a gas will be at 34 degrees meaning that the POA valve will hold the evaoporator at 34 degrees or warmer so it wont be as cold as an original R-12 system and or a system filled with HyChill.

HyChill 30 gas will be at 21 degrees at a pressure of 30.1 psi when the POA valve begines modulating so is much colder.  However, there is a risk that the temperature of the evaporator core will drop well below freezing point and cause moisture on the core to freeze and potentially cause an aiflow blockage.  To date, I have never experienced blocked airflow from a frozen over evaporator probably because I only use my AC when it is hot and the incoming air is too warm to let the evaporator get down that far.

What oil should I use in my system?

The original Frigidaire systems used 525 viscosity mineral oil which mixed perfectly with R12.  It is critical that the oil used mixes properly with the refrigerant gas as it is the refrigerant which carries the oil around the system to lubricate all the components.

In my 1st HQ AC system rebuild I bought a reconditioned compressor from a major AC parts suppler.  That compressor stipulated that PAG synthetic oil must be used in that compressor.  PAG oil was also the recommendation from the manufacturer of HyChill Minus 30.  However, when pulling the AC system apart a year later to renovate my engine bay I found that the PAG oil in the hoses, etc seemed to be forming into globules rather than completely wetting the inside of hoses and other components.  After some internet research, I found a number of articles about refrigerant oils not mixing properly with different refrigerant gases. I decided to do a test by adding a small amout of HyChill 30 refrigerant and PAG oil into a glass pressure bottle, To my surprise, the PAG oil formed into globules in the presence of the gas.  If that was happening in the system, it would likely cause issues at the expansion valve and POA valve orificies, let alone the compressor.  I then mixed 525 mineral oil with HyChill 30 and the oil mixed completely with the liquid refrigerant – no globules.  From that point on, I now only use 525 viscosity mineral oil which is what the original system was designed to use.

What size V-belt to drive the AC compressor on a HQ 350 car? 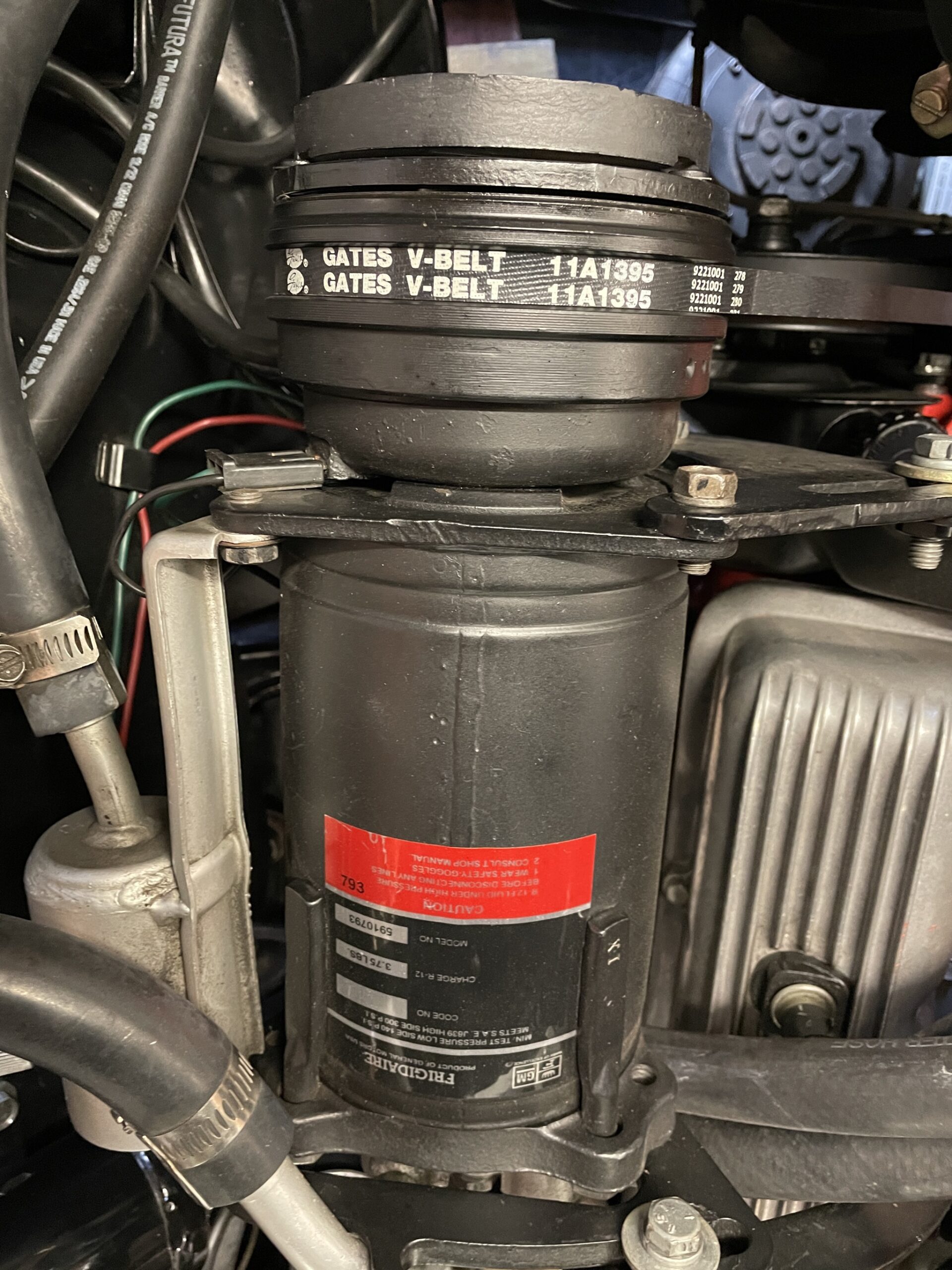 Steps to get your HQ – HZ factory air system up and running:

1.  Has the system been left “open”, ie hoses disconnected?

2.  Check your existing Frigidaire compressor is ok to re-use;

4.  Replace any damaged our doubtful hoses

5.  Check all wiring and vacuum hoses – does the fan operate on all 4 different speed settings?

6.  Do all the vacuum controlled doors of the cabin air distribution unit operate correctly from the control panel to provide;

Switch position 3 on HQ, 4 on HJ on = outside non chilled air to footwell =  compressor clutch OFF

Switch position 4 on HQ, 5 on HJ on = non-chilled demister air – compressor clutch OFF.

7.  Evacuate the system using a vacuum pump to remove air and moisture from the system.

9.  Re-charge with the specified quantity your preferred refrigerant gas.  490 grams of HyChill 30

10.  Test system performance against the original Holden spec in the chart below.  Temperature is measured at the centre outlet, fan on highest speed setting, vent control on “Max” ie inside recirculated air, windows closed.  A static test in a Holden workshop would have a high capacity blower sending air into through the condenser and radiator.  I find that driving along a freeway at 100KPH provides sufficient airflow to achieve maximum cooling. 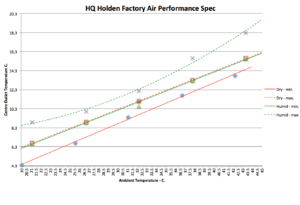 Note: some images in the albums below have explanatory notes along the bottom.  You will need to move your cursor outside the area of the photo to see the notes.